Clara Rose debuted her latest song “The Bird Machine” on Shannonside Northern Sound today. Listen to the song on the website player to your left

Fresh from her Marlay Park appearance with The Don Baker Band – where she shared a stage with veteran blues harmonica legend Don Baker & sang alongside Sinead O’ Connor – Clara Rose is now planning her music video launch and also a NEW LOOK website… check this space for future details!

Clara Rose and Mamma Rose will be onstage on Saturday 25th of August in Marlay Park, performing their unique brand of backing vocals as part of The Don Baker Band, supporting Van Morrison and Tom Jones 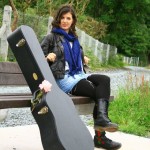 Clara Rose has recorded 2 tracks with Don Baker (http://www.donbaker.ie/) for his new album “My Songs, My Friends” which is due for release in 2012.

Clara is featured on 2 tracks of the album, “Never Let You Down” and “Fergus (Healing Song)”.